My first dive into the IoT world!

My wife recently asked me about purchasing an automated pet-feeder for Kneesox, our Cornish Rex cat. After doing some initial research I quickly realized that most feeders, which retail for upwards of $150 USD, are primarily composed of simple servos and a timer mechanism.

After some quick research and a trip to GitHub, I learned about a cheap $5 USD micro-controller which could power a variety of general purpose input-output devices AND with the added benefit of having WiFi on the chip!

My repository, nodemcu-iot-starter-kit is a few demos showing how to get started with this micro-controller. Naturally, there were a few steps I needed to take to get my development environment setup to work on this device.

So what I realized quickly is that the ESP8266 that I purchased comes pre-flashed with a Lua interpreter onboard. Almost all tutorials are telling me that we should go ahead and flash it so we can use the Arduino IDE.

NOTE: This action is writing directly to the firmware, erasing the NodeMCU firmware. We can always flash it back to the old Lua SDK if we want.

Step 4 is where we actually flash the controller with the new board package. This was done using the Board Manager feature of the Arduino IDE.

Once everything was setup, I simply followed the rest of the instructions which have us print out the infamous Hello World! prompt via our micro-controller.

To do this, open up Arduino IDE and set the following config values 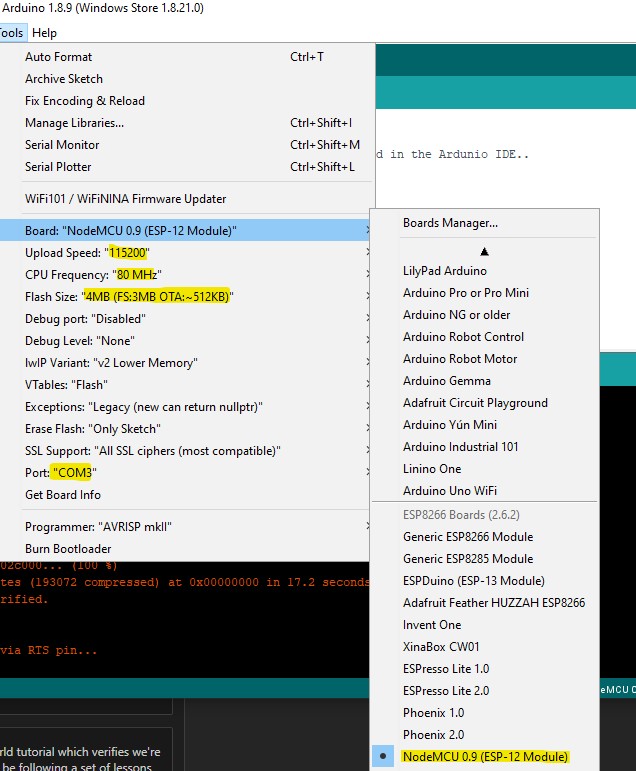 Once you have this setup you'll be on your way to flashing the ESP8266 with your arbitrary code.

Hello World is pretty easy on this controller, the code is located in /lessons/1-hello-world.

Although small, this is actually really cool to see in action. The next thing I worked on was blinking an LED that came with my starter kit.

The first task was to blink the onboard LED. To do this, we just have to set pin D1 to OUTPUT mode, then in our main loop, then toggle this from HIGH to LOW to represent on and off.

I found the tutorial doesn't really explain the constants being used in the lib, so a quick google search led me to the official Arduino reference!

2A - Blinking an external LED

Although this post isn't intended to be any type of exhaustive guide, I will have subsequent posts containing more detailed guides as well as documentation on my automated pet feeder project!